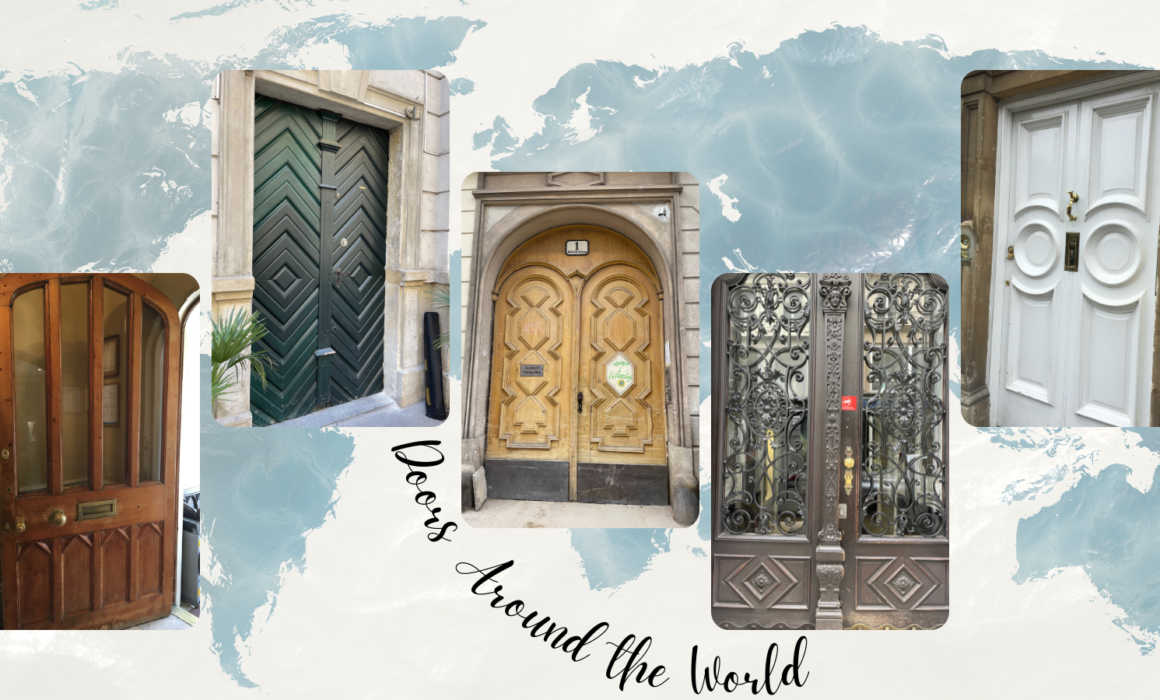 I love doors and have taken photos of doors from all over the world!

“We keep moving forward, opening up new doors and doing new things, because we’re curious… and curiosity keeps leading us down new paths.”

Every door gives rise to a new adventure.  Do you take a look and wonder what lies behind? Do you have the courage to open and see for yourself or are you content with just passing by?  I find doors incredibly fascinating and find myself photographing the many doors I encounter around the world.

My favorite door hardware is the door knockers.  They are so fun and are not very abundant so when I spot one, I have to check it out!  Door knockers can vary from a simple ring to an animal to an intricate design.  I’ve also scoured doors around the world for beautiful handles, striking hinges, and the occasional mail drop.

Famous Doors Around the World

Columbus Doors – Right in our own community are the Columbus doors at the US Capitol building in Washington DC.  These doors are made of bronze with different scenes from the life of Christopher Columbus.

Holy Door – The Holy Door at St. Peter’s Basilica is only opened during a holy year which occur every 25 years.  St. Peter’s Basilica website states, “On the first day of the Holy Year the Pope strikes the brick wall with a hammer, and so opens the door to let in the pilgrims who come to make the most of the indulgence. It will be closed by the Pope himself at the end of the Holy Year. The Holy Door represents Jesus, the Good Shepherd and the gate of the sheep pen: ‘I am the gate. Whoever enters through me, will be safe. He will go in and out, and find pasture’ (Jn 10:9).”

Portal of the Last Judgment – Located at the main entrance to Notre Dame Cathedral is the Portal of the Last Judgment.  Honestly, all three doors located on the west facade are brilliant with their carvings depicting the Virgin Mary, astrological calendar, Christ, the apostles, resurrection of the dead, and judgment day.  Above the three doors are 28 statues of the Kings of Israel.

The Golden Gates of Dar El Makhzen – Although you are not allowed to enter the Royal Palace of Fez, you most certainly can admire its seven opulent golden gates.

May your adventures lead you through new doors and take you back through your favorites!  Please share any door photos or special doors that have brought meaning to you, I would love to hear about and see them. 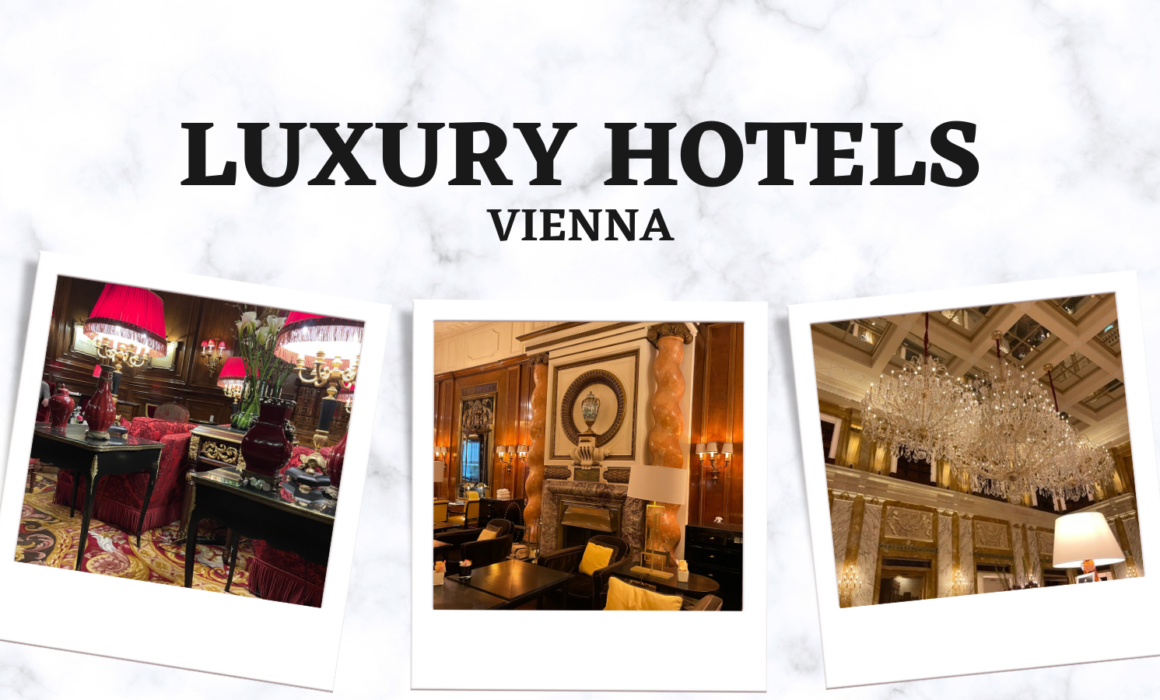 With the exquisite architecture found throughout Vienna, it’s no secret that you’ll find magnificent luxury hotels sprinkled throughout the city.  Many with a history dating back to the 1800s.

Hotel Sacher… and to think that it all began with dessert!  In 1832, Prince von Metternich asked his apprentice, Franz Sacher, to construct a special dessert.  The outcome was a masterful mix of chocolate, apricot jam, and whipped cream and is known around the world as the Original Sacher-Torte.  Forty-four years later, Franz’s son, Eduard, opens a luxury hotel in the heart of Vienna, rightfully taking on the family surname, Sacher.  Shortly after the last of the Sachers died in 1930, the Gürtler and Siller families took over and restored the beautiful hotel to its original glory.  Throughout WWII, the hotel is taken over by different countries and finally lands back in the hands of its rightful owners.  In 1962, the last Siller died which left the Gürtler family in complete control to the present day.

“The Sacher Hotel has long been a place where artists, politicians, and personalities meet and mingle. Celebrities from all over the world have been welcomed at the Sacher from its inception until this very day.”

It has been a treasured meeting place for many throughout the years such as U.S. President John F. Kennedy, Anna Netrebko, Queen Elizabeth II of England, Sharon Stone, Justin Bieber or Naomi Campbell.  I felt prestigious walking along the same corridors and sipping champagne in the same bars as some of the world’s most renowned!

Another amazing hotel filled with Viennese charm is Hotel Bristol, a Luxury Collection Hotel and party of Marriott Bonvoy.  With its prime real estate next to the Vienna State Opera on Ring Boulevard since 1892, it is a great central location for all the sights Vienna has to offer.  Additionally, its rooms offer some of the best views in Vienna and the rooms are quite the spectacle themselves with their beautiful antiques and modern amenities.

Within Hotel Bristol is one of my favorite bars in Vienna, The Bristol Bar.  It is the first “American Bar” in Vienna and I love it for its cozy atmosphere (fireplace included) and decor.  The amazing architect, Pierre-Yvess Rochon, stylishly designed the space with chic leopard patterned carpet, friendly wood-paneled walls, and a gentle cognac-colored ceiling while incorporating the Art Deco style of the hotel.  I am not the only person to become infatuated with this watering hole; the walls bear autographed photos of Richard Strauss, Leonard Bernstein, Herbert von Karajan, Rose Kennedy, and Enrico Caruso.

A place designed for a prince, this hotel is dazzling in decor from its immaculate marble to the dangling chandeliers dotting the royal staircase.  It was converted into a hotel in 1873 for Vienna’s World’s Fair. One must try the incredible torte that was created for Emperor Franz Josef, hence the name of the hotel, Imperial.  It’s a secret concoction of marzipan, oranges, and raspberries.  You can find beautiful oil paintings of Franz Josef throughout the hotel.

When visiting Vienna, if you don’t have the luxury to stay in one of these fabulous hotels, at least pop in to marvel at the gorgeous decor and maybe sip on a cocktail.  Cheers to your trip to Vienna! 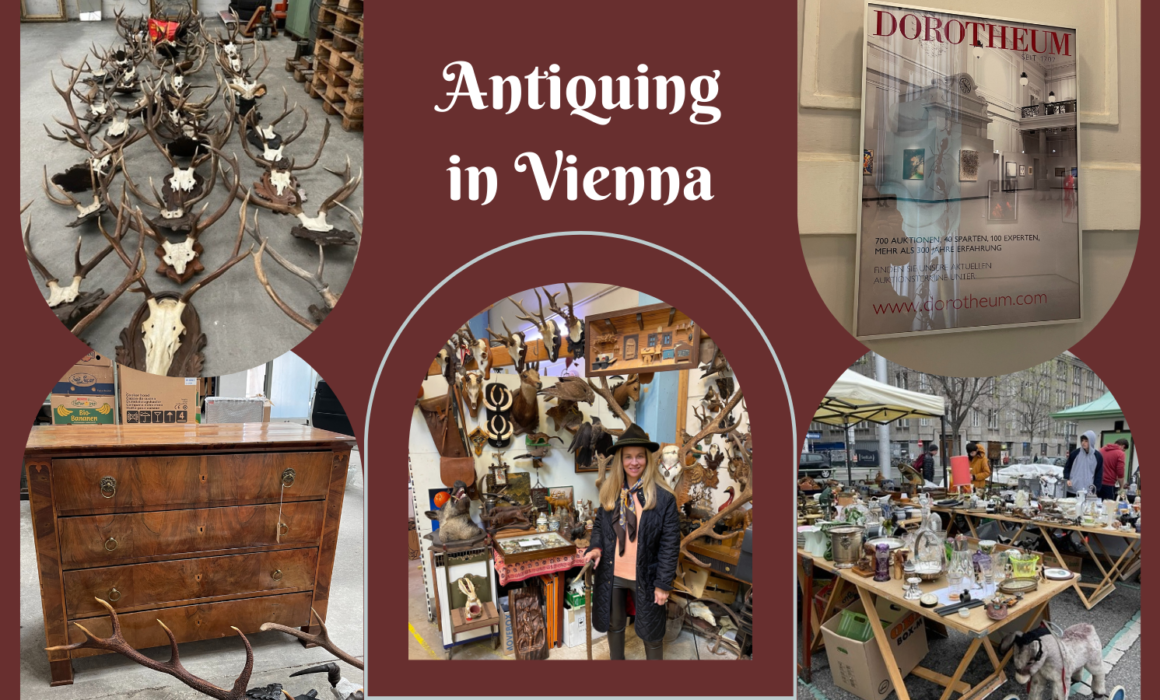 As an interior designer, I absolutely love searching for antiques when traveling!  Vienna and the surrounding countryside did not disappoint in my pursuit for uncommon treasures.  I found numerous items from antlers to chests and I am so excited to present these gems to my clients, maybe even keeping a few for myself.

You might be thinking how do I get all of these objects back to America?  As I go on these trips for half business half pleasure, I organize for the items to be secured appropriately, packed into a storage container, and shipped to the US.

Some of the beautiful antiques that I found during this trip were:

Some of my favorite finds came from an hour outside of Vienna in a town known as St. Polten.  If you love antiquing as much as I do, you will not want to miss this hidden treasure in the Austrian countryside.

Among one of the oldest auction houses in the world is The Dorotheum Auction House in Vienna. Today, its goal is to put Vienna on the world’s stage as a top auction destination while preserving the heritage that gave it its start. I adored walking and gawking at all the displays!

The early bird catches the worm!  At the crack of dawn every Saturday in Vienna, they have the Naschmarkt.  Some consider it a cult event where the vendors sell antiques, produce, fruit, cheese, flowers, and food from all over the world.  We had a ball searching through all of the stalls locating unique treasures.

Vienna, Austria is an antique lover’s dream so make sure to designate time during your trip for a one of a kind treasure hunt!